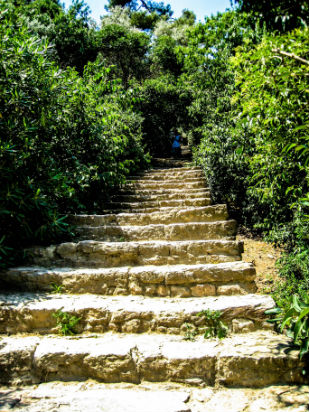 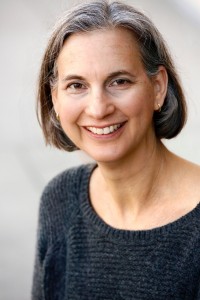 Twenty years ago, when I thought I knew everything, I would shrug off complaints of abdominal pain and constipation in my eating-disordered patients. Of course you’re not having any bowel movements, I would think to myself. It’s because you’re not eating. There’s nothing in there! And then I would confidently counsel my patients that their constipation would resolve as soon as they were able to eat enough to gain weight.

In the first 10 years of hospitalizing patients at Torrance Memorial Medical Center, I rarely consulted a gastroenterologist. Now, every patient who is admitted has a gastroenterology consultation. How ironic that I (and likely many other physicians) didn’t consider the possibility of very disturbed intestinal function in patients whose eating behaviors were so extreme. Food is absorbed in the gut; it is logical that the stomach and intestines are affected by severe changes in eating patterns.

Food travels from the mouth through the esophagus, stomach, small intestine, colon, rectum, and finally the anus. Nutrients are absorbed and the excess material is expelled in the form of feces. Hence, one of the most important functions of the intestinal tract is to move the food at the proper pace so that nutrients can be absorbed via the small intestine and the right amount of water reabsorbed from the colon. The undigested residue (fecal material) then needs to be moved out of the colon. This movement, called peristalsis, is accomplished by smooth muscles that surround the entire length of the gastrointestinal tract. There are several mechanisms that control peristalsis. One is the stretching of the stomach or intestines that happens when a meal is eaten. Another is hormonal secretion in response to ingesting food. The gastrocolic reflex refers to the feeling of having to defecate after filling the stomach (by eating a meal). When a person is starving, motility can become sluggish (Robinson et al., 1990). This is because the body is trying to preserve vital functions; everything not crucial for staying alive is either slowed or stopped. Bulimics may have delayed motility because they have become desensitized to food being in the stomach (Devlin et al., 1997).

Delayed gastric emptying, or gastroparesis, occurs when the stomach empties slower than normal. The most common symptom is a feeling of fullness that occurs after eating only a small amount and/or a sense of food sitting in the stomach for a long time after eating. Patients can also have nausea and vomiting, abdominal pain, bloating, and lack of appetite.

The presence and degree of gastroparesis can be confirmed by a gastric emptying study (GES). The patient eats a test meal (at our hospital, a peanut butter-and-jelly or egg-salad sandwich) containing a radiolabel. The patient is scanned (the procedure involves lying still on a table for about a minute). He or she then returns for another scan 90 minutes later. Normally, at least 50% of the meal should be cleared from the stomach at 90 minutes.

Figure 1 shows a normal GES. At time zero minutes, there are about 670 counts per second (seen as the intersection of the red line with the y-axis). Half of 670 is 335, represented by the blue “x” on the y-axis. Following the dotted blue line across, we can see that this number of counts occurs at 78.5 minutes, which is less than 90. This scan is normal.

Now look at Figure 2. At the start, there are 2200 counts per second. Half of that is 1100 counts per second, represented by the blue “x” on the y-axis. Looking across the dotted line, we see that it never intersects the patient’s curve; when the test is stopped at just short of two hours, more than half of the meal is still sitting in the stomach. Now imagine that this patient is in a program. She’s had breakfast, and two hours later, it’s time for snack. She does not feel like eating and refuses half her snack. After being given a liquid supplement, she complains of nausea and bloating. Staff and patients view her as being poorly motivated to recover.

Fortunately, gastroparesis can be treated. “Prokinetic” medications can be used to help improve stomach motility. They promote forward movement and prevent backward movement (reflux). Our first choice is erythromycin ethylsuccinate. This medication is primarily used as an antibiotic, but it has a helpful “side effect” of stimulating motility. This effect happens even at low doses, so the dosing is different from when it is used to treat an infection. For patients who are allergic to erythromycin, other medications such as metoclopramide can be used. It is common for patients to need treatment for several weeks to months. Antacids are also frequently used to prevent pain and esophageal inflammation resulting from reflux.

Close to 100% of patients who are sick enough to be admitted to our hospital program have constipation. Many complain of it, but some do not. Constipation is also extremely common in outpatients with both anorexia and bulimia. Let’s start with a definition: Constipation means bowel movements that are infrequent or hard to pass. A patient with anorexia may be eating very little, but the intestinal lining is sloughed off and replaced about every three days. This sloughed tissue creates fecal material, and stool continues to form even if oral intake is very low. In addition, there is very little intestinal movement (peristalsis) happening; patients with anorexia and bulimia have been shown to have slow intestinal transit times (Kamal et al., 1991). One of the functions of the colon is to absorb water back into the body. Because of the slow peristalsis, too much water is reabsorbed, leaving very hard stools that are difficult to evacuate. Over time, large amounts of stool accumulate, and the colon and rectum can become stretched out, like a balloon. An excellent illustration of this can be seen in the video “The Poo in You” (youtube.com/watch?v=SgBj7Mc_4sc), by Becky Kendall, NP, from Children’s Hospital Colorado. In the video, developed for children, the cause of the constipation is encopresis, or voluntary withholding of stool (often owing to embarrassment or fear of using school restrooms). In eating disorders, the cause is decreased peristalsis and slow transit time, but the results (constipation and possibly a stretched-out colon and rectum) are the same.

Plain abdominal X-rays can be useful in assessing the degree of constipation. Figure 3 shows a normal abdominal film. In an X-ray film, bone appears white, while gas appears black. Muscle and other tissue is light gray. In the figure, you can see the outline of the colon, and there is a lot of black space. This is normal. Now look at Figure 4. There is very little black space; instead, we see a spongy pattern. This is fecal material, and it appears everywhere in the colon. The circle at the bottom of the film outlines the rectum; we can see that it is very stretched out, as if blown up like a balloon. This patient needs help. Otherwise, the colon may stay stretched out indefinitely, and the patient could become chronically constipated.

We generally use polyethylene glycol 3350 (MiraLAX), which is an osmotic laxative available over the counter. It is a large molecule that simply draws water into the colon, loosening stool, and making it easier to pass. Doses of three or four times a day are often used for this level of severity, for several months to years. Patients with severe constipation should be followed by a gastroenterologist (adolescents should see a pediatric gastroenterologist, if available in the area). Ergonomic aids such as the Squatty Potty can also help by positioning the patient in a more natural squatting position, making elimination easier. Patients can sit on the toilet after eating a meal, in order to take advantage of the gastrocolic reflex. Probiotics may be of some benefit in improving intestinal health and are widely available.

Abdominal X-ray films are often under-read by radiologists, who have an orientation of diagnosing acute and/or life-threatening conditions, such as kidney stones and tumors. For example, in Figure 4, the radiologist reported that “a moderate to large amount of stool is projected throughout the colon.” But the impression was reported as “within normal limits.”

Gut motility is important to consider in anyone with an eating disorder who has symptoms of abdominal pain or discomfort, a feeling of fullness after eating small amounts, reflux, constipation, or bloating. It is very important that patients be evaluated by a physician who has experience with eating disorders, and preferably by a gastroenterologist. MiraLAX and other medications should not be self-prescribed, with the exception of probiotics, which can be used according to the label.

My gastroenterology colleague, Dr. Mini Mehra, likes to say that relieving GI discomfort is like giving a person with an eating disorder a bridge, so that they can get to recovery faster and easier.

Thanks to Dr. Mini Mehra for many of the concepts in this article. 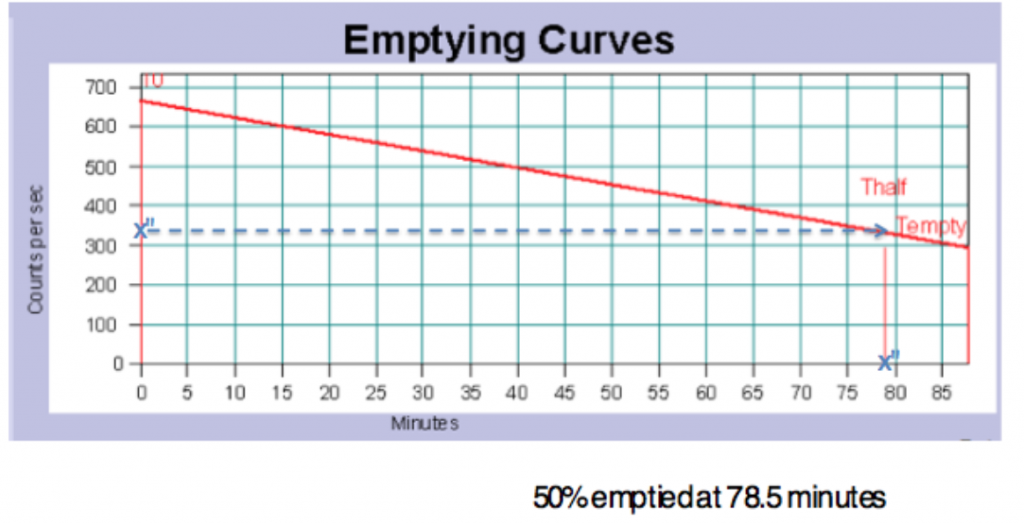 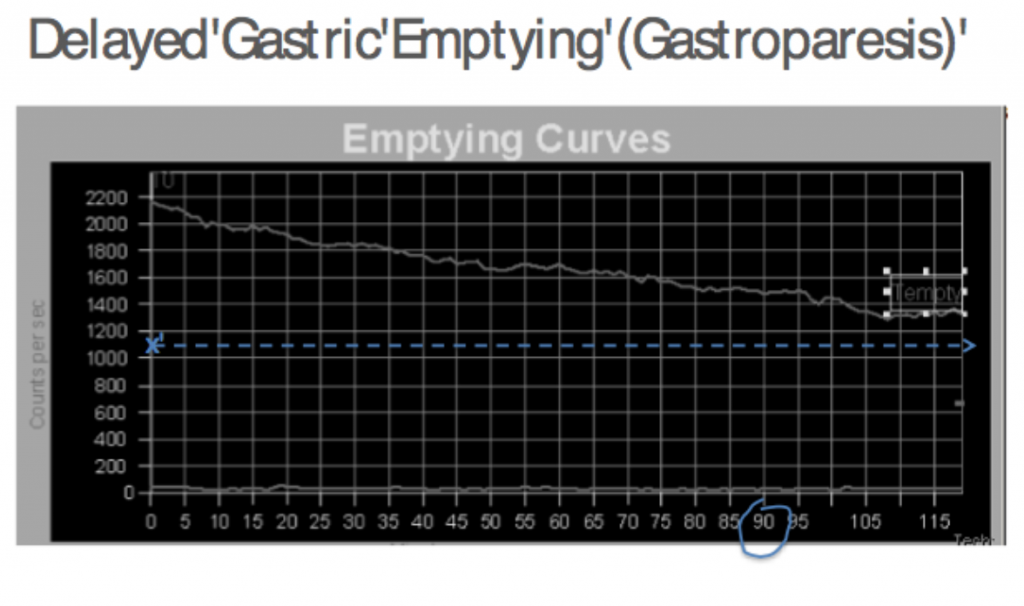 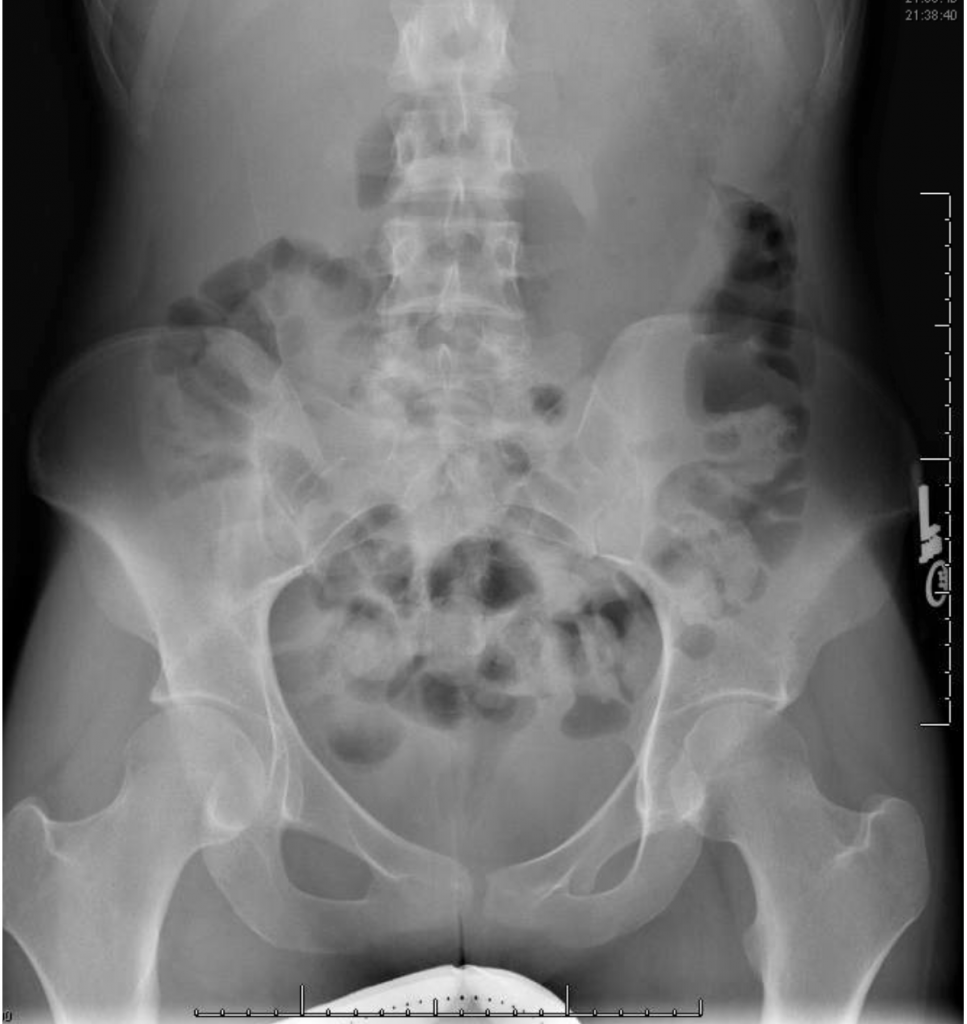 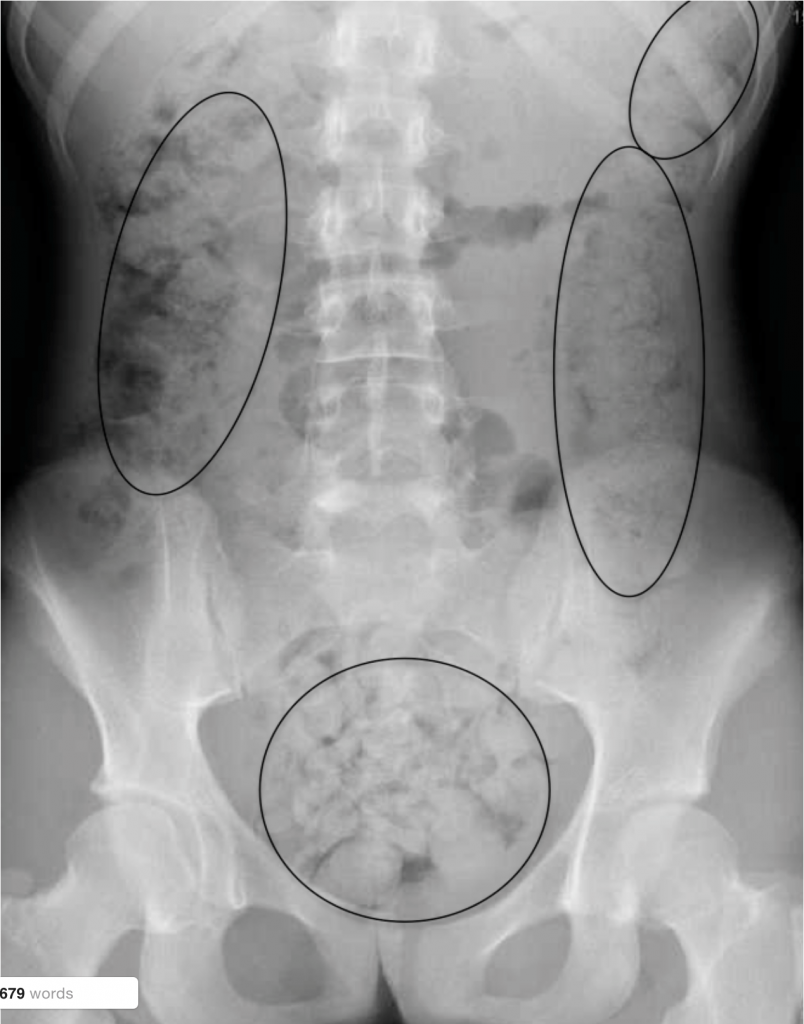 Dr. Linda Schack has been treating teenagers and young adults with eating disorders for more than 20 years. She has overseen the care of patients with eating disorders in residential, hospital, and office settings, and is Medical Director of the Torrance Memorial Medical Stabilization Program for Patients with Eating Disorders. Dr. Schack has been a lecturer at the International Association for Eating Disorders Professionals (IAEDP) and the Academy for Eating Disorders (AED) international  conferences. In addition to her specialized work with eating disorders patients, Dr. Schack provides comprehensive health care for teens and young adults at her Torrance office.  Dr. Schack is one of a handful of board certified adolescent medicine specialists in the country, having first trained in pediatrics at Childrens Hospital Los Angeles (CHLA), and then continuing at CHLA for her adolescent medicine fellowship.