Filling Up: The Psychology of Eating – Author Interview 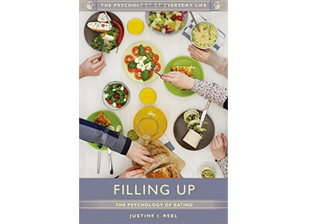 Justine J. Reel, was kind enough to join us and answer questions about her book, Filling Up: The Psychology of Eating. What follows are our questions in italics, and Justine’s thoughtful answers.

In your book, Filling Up: The Psychology of Eating, you address how humans differ from other animal species when it comes to food and eating? Please tell us a bit about this.

The meaning of food and eating can be categorized into several needs: biological, psychological, and social. For animals, the biological need is the primary driver for eating behavior. In other words, food selection is driven by an innate way to survive and represents the complexity of their digestive systems. For human beings, on the other hand, there are many reasons that people eat and select the foods they consume. In addition to satisfying hunger, humans also have emotional reasons for eating certain types and amounts of food. For example, stress eating or eating when upset may have little to do with nutritional intake requirements or hunger cues. Someone may eat more or less when experiencing negative emotions. Moreover, a variety of social trends can influence eating patterns and the types of foods that are in vogue. Foods can also play a role in supporting one’s family traditions or customs. We enjoy certain kinds of food for specific holidays (e.g., Thanksgiving) and events (e.g., weddings)

You discuss the meaning food has related to the psychological makeup of an individual. Can you please comment on the meaning of food for one’s identity?

Eating behavior may be deeply entrenched in one’s identity and can lead to consuming a particular diet, disordered eating behavior, or limiting certain types of foods. For example, people may choose vegetarian diets for numerous reasons. Someone may identify as vegetarian to consume a healthy diet or the decision may be highly personal based on religious beliefs or ethical reasons related to consuming animal products. Likewise, the gluten-free movement has been associated with a shift in one’s identity that has influenced the overall food industry.

Can you offer some ideas on the impact of parental modeling on children’s eating habits?

Parents serve as role models for all types of behaviors. Children will imitate others around them in everyday behaviors such as manners and language as well as health-related behaviors and thoughts. For example, parents may discuss “avoiding carbs” giving the message that any foods with carbohydrates are bad or evil. Likewise, parents can model a healthy relationship with food that is based on listening to body cues of hunger and fullness.

You report “Dieting has been directly linked to fueling of body dissatisfaction.” Please discuss some of the research that supports your comment.

Dieting behavior refers to the restrictive of overall food consumption or the avoidance of certain types of food. There have been relationships drawn between dieting and body dissatisfaction which is important given that body dissatisfaction serves as the strongest predictor of eating disorders.

Can you please describe the various physiological theories regarding the causes of obesity?

For some individuals, the response to stress is to eat more fatty types of food. This response lends itself to increased risk for becoming overweight or obese which has been associated with numerous chronic diseases and health consequences. The physiological explanation around this link to obesity has been offered to explain the stress and eating relationship. That is, stress-induced arousal when measured by blood pressure and heart rate was found to be related to increased food intake. Cortisol, a hormone associated with stress, has also been attributed to increased stress levels.

You included a chapter entitled, “Where: Eating around the World.” How do you think this material can help those in the eating disorders community?

Part III of Filling Up: The Psychology of Eating focuses on three controversies and debates. Please summarize the two sides of the piece on “Is Sugar Addiction a Myth or a Reality?”

Although the concept of sugar addiction is controversial, it is acknowledged that food cravings can be intense. Because cravings are believed to be associated with one’s mood, psychological triggers, or when certain emotions are present, the response can look similar to a drug addiction. People commonly report that these addictions to food are real and can only be dealt with by the consumption of the targeted food which has become the object of one’s craving. There is evidence that having a food craving or strong urge to consume a particular food item is linked to the tendency for binge episodes.

Conversely, there are many arguments for sugar addiction as a myth. First, if a true addiction, impaired control of sugar use would result in a continued craving for the substance, using risky behaviors to get sugar, and further strong cravings for sugar, and withdrawal symptoms. Generally there is decreased desire for the food later in the day that contradicts the addiction model. Moreover, there is not a lot of evidence that people are using risky behaviors to obtain sugar. Finally, the evidence for physical and psychological withdrawal is weak.

Dr. Justine Reel is an Associate Dean of Research and Innovation and Professor within the College of Health and Human Services at University of North Carolina Wilmington. Prior to this position she served as a faculty member, Director of Graduate Studies, and Associate Chair in the Department of Health Promotion and Education at University of Utah. She has also taught at West Chester University, Temple University, Pepperdine University, and Salem College. She is currently a Licensed Professional Counselor in the states of North Carolina and Utah. Dr. Reel has published the following books: Hidden Faces of Eating Disorders and Body Image, Eating Disorders: An Encyclopedia of Causes, Treatment, and Prevention, Working Out: The Psychology of Sport and Exercise, and The Female Athlete Triad along with over 100 manuscripts and book chapters. She serves as the Evaluator on the North Carolina Public Health Training Center team as part of the HRSA Region IV LPS. She received her doctorate and master’s degrees at the University of North Carolina at Greensboro and completed her undergraduate work at North Carolina State University.

The Importance of Getting it Right: Nutrition Misinformation can be Harmful

the intuitive eating workbook for teens: a non-diet, body positive approach to building a healthy relationship with food Interview