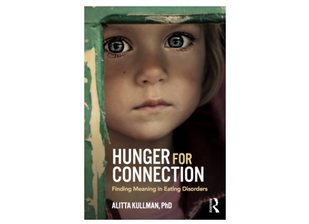 Alitta Kullman, PhD, PsyD, LMFT, author of Hunger for Connection: Finding Meaning in Eating Disorders, joined us for an interview on her book. What follows are our questions in italics, and her thoughtful responses. 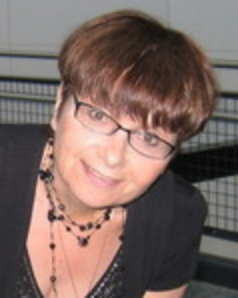 Early on in Hunger for Connection: Finding Meaning in Eating Disorders, you mention W. R. Bion’s “Theory of Thinking” and wonder if your interpretation of this theory would “hold up in light of contemporary advances in neuroscience and infant development.” Can you please summarize Bion’s theory, how you use it, and what you concluded?

Well, it is not easy—or brief—to summarize Bion! But let me try by saying that W.R. Bion, a psychoanalyst, noted that a newborn infant cannot differentiate between the physical and emotional distress evoked by his/her first experiences of hunger; physical and emotional are one and the same. If the baby’s mother (or primary caregiver) is able to understand the dual physical/emotional nature of the baby’s distress, and feeds soothing back into the infant along with the milk, the baby is “contained;” the “realization” that someone or something exists outside of him/herself that can soothe, enables the baby to begin to “think with his/her thoughts” and make links with others. But if, for whatever reason, the mother is unable to understand the dual nature of the infant’s distress or respond to it, the baby becomes increasingly agitated. S/he nurses with “increasing force and frequency,” cries, flails arms and legs, trying with whatever physical means s/he has to alert mother to his/her emotional needs. But if all his/her efforts fail, the baby is left with a terror inside—a “nameless dread”—that disrupts his/her developing capacity for thinking. Unable to use his/her thoughts for thinking or making links with others, such an infant, Bion concludes, goes on to spend his/her life attempting to “evacuate” distress into others, forever in search of the emotional “container” s/he is never able to find (Bion, 1962).

Bion was interested in crafting a theory of thinking disorders and not of eating disorders. But as I thought about his metaphor, it occurred to me that it could serve as a virtual blueprint for the agitated, circular, and undifferentiated thinking and eating patterns in individuals with binge/purge eating disorders. Using contemporary infant and developmental research, I proposed that “when  misattunement occurs simultaneously with the instinctual process of food-seeking, reaching for emotional connection by way of the feeding remains encoded in implicit memory as the  (limbic system’s) automatic ‘go to’ solution in the face of overwhelming emotional experience” (Kullman, 2007). In Hunger for Connection, I show how this early, pre-attachment state goes on to impact all subsequent stages of body/mind development, ultimately becoming organized into what I call the “perseverant personality” that I believe underlies and fosters the development of binge/purge eating disorders.

In essence, people with perseverant personalities learn to “think” with their bodies; their bodies and minds work interchangeably rather than interactively. Because food and thought remain so inextricably linked in their psyches, a cyclical eating disorder in some form is invariably a key element of their personalities. But people with perseverant personalities also share what I believe to be consistent and predictable thought patterns, belief systems, fears, self-talk, and/or emotional enactments that are as intricately interwoven with each other as they are with the physical enactments of their eating disorders. A perseverant personality is thus steeped in what I call a solitary and circular “one-person psychology,” where thinking alone rather than together with others is the primary mode of thought-processing, food serves as one’s most reliable and trusted companion, and secrecy and shame conspire to create the notorious “low self-esteem” and negative body images traditionally associated with eating disorders. For the individual with a perseverant personality, fear lurks just beneath the surface, words for feelings are often absent or cannot be described, tolerated, or experienced, and self-regulation is an ongoing challenge.

As you share case examples, you note how the bingeing/the purging/the dieting/the eating disorder are the body’s way to help the individual survive being emotionally overwhelmed. How do your patients relate to this dynamic when you interpret this?

Most often with great relief! Many of my patients have previously had some form of cognitively-based therapy, but unfortunately have gained little understanding of the deeper emotional dynamics that underlie their disorders. They literally hunger for meaning. I have found that people with cyclical eating disorders are extraordinarily bright, perceptive, sensitive individuals who crave such understanding and meaning, and can learn to make use of it to help give cognitively-based interventions more meaning.

In the disconnect that occurs via thinking with the body, what are some skills an individual can develop to shift to mind-based thinking?

The primary goals in treatment, as I see it, are: a) the development of the capacity to think together with others, and b) the development of the capacity to differentiate food from thought. An eating disorder is a disorder of aloneness; the perseverant has learned to turn to food as his/her most reliable and trusted companion. Learning to think together with a therapist, and then, by extension, with significant others in one’s life, is of utmost importance. At the same time, people with eating disorders also need mind-based tools to help them learn to think in times of distress—things like mindfulness, meditation, spirituality, writing, etc. I think we have made a real mistake trying to have “either/or”—either cognitive-based or psycho-dynamically-based—modes of treatment. We need both! Rather than “re-covering-up” the real causes of their eating disorders over and over again, patients with eating disorders need to “uncover” the meaning and learn new ways of addressing their needs with uniquely specific and targeted interventions. This combined mode is what I call “un-covery.”

What would you like people who have a perseverant eating disorder to know can happen if they cling to an “ideal” way of eating?

Eating is as emotional as it is physical, and deprivation is the “mother’s milk” of a binge. People with eating disorders need to learn to be more gentle with themselves, not harder on themselves. Trying to stick to a “perfect” or “ideal” way of eating inevitably disregards the internal cues their minds are trying to convey when they have ‘food thoughts’ or cravings, and blaming themselves when they don’t stick to their “ideal” only feeds their negative perceptions of themselves. In Hunger for Connection, I walk the reader through the process of determining the factors that are most important and relevant for them, and help them learn to be more flexible in their relationships with food.

Please tell us why it is so important for the patient with an eating disorder to be able to fully express anger to their therapist and learn this anger won’t destroy the patient, the therapist, or their relationship?

That is exactly the reason! People with perseverant personalities have not learned from their experiences that they can be “contained” by others. In fact, they have functioned as their own “toxic containers,” holding and storing their own toxic feelings inside themselves, becoming identified with it, and coming to see themselves as toxic. Many have been accused of being “selfish” or “self-absorbed” if they haven’t met the needs of others, and/or have come to believe that there is something wrong with, themselves, or that they can’t have, shouldn’t want, or do not deserve what they need, want, or feel. In the therapeutic connection, encouraging these patients to express these unexpressed thoughts, feelings, and needs—and helping them discover that they and others can survive them—is a real developmental achievement.

Your book offers quite a bit of information on the interrelatedness of emotions of emptiness, loneliness, and disconnection and seeking relief from these emotional states by trusting food. Do you have a take-away message for your readers?

For those suffering with eating disorders, I would say the take-away message is to take yourself seriously; to seek out help that genuinely feeds and takes seriously the emptiness, loneliness, and disconnection you have experienced. For readers who treat or care about someone with an eating disorder, I would offer a similar message: Opening the lines of communication, becoming a receptive “container” for the emotional states, encouraging the sufferer of an eating disorder to find words for and express his/her inner experience, can ultimately help to transform a hunger for connection into something that can finally be found.

Alitta Kullman, PhD, PsyD, LMFT, has been in the private practice of psychodynamic psychotherapy, psychoanalysis, and marriage, family, and child counseling for more than 30 years, specializing for much of that time in the treatment of eating disorders. She holds both Ph.D. and Psy.D. degrees in Psychoanalysis from the Newport Psychoanalytic Institute in Orange County, California, and a Master’s Degree in Clinical Psychology from Pepperdine University. Her doctoral dissertations were both on the subject of eating disorders.