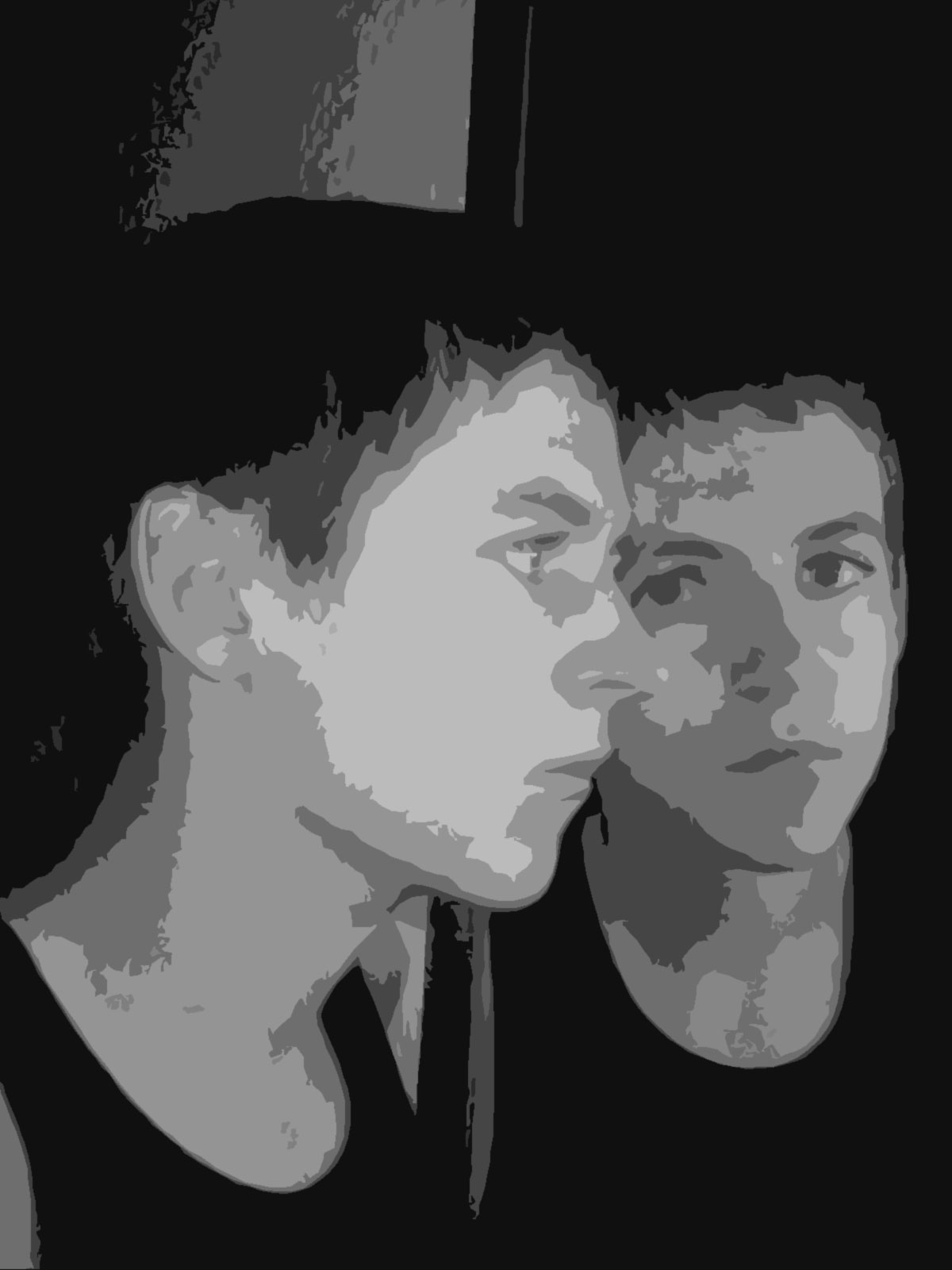 I feel that men are currently in a place with body image and eating disorders that women were 30 years ago. Back then, women suffered in secret and the disorders were grossly misunderstood. Unfortunately, over the past several years men have been experiencing the same pressures from the constant bombardment of images of the ideal male, yet the problem is not openly discussed. Also, men are not expected to care so much about their appearance and eating disorders carry a feminine stigma. Consequently, many males suffer in secret.

In 2005, I began touring a solo show about these issues called MuscleBound, which is a multimedia, multidisciplinary performance blended with an original film documentary. I interviewed over 30 men from all walks of life—guys who have had eating disorders, guys who have tried steroids once or for many years, and guys who just go to the gym on a regular basis. After being interviewed, many of them commented to me, “So I’m the only one who said all that, right?” They were all embarrassed and ashamed because they felt like they were alone.

One of the most important topics I focus in on with my show is muscle dysmorphia (also known colloquially as “reverse anorexia” or “bigorexia”), where muscular men feel too small and exercise obsessively to gain girth despite the fact that they are actually large. Today, more and more young men and even boys are turning to steroids and supplements in an effort to gain not only the edge in a sporting competition, but also to gain the societal standard of the “perfect male” body: broad shoulders, ripped chest, big arms, and six-pack abdominals.

I suffered from anorexia and compulsive overeating in high school, which then turned into an obsession with the gym. In the latter stages, I didn’t think I had a problem because I never saw any description of my symptoms. I wasn’t starving myself and I wasn’t throwing up. All I was doing was going to the gym on a strict schedule, often to the point of not hanging out with friends and even ignoring religious holidays. I remember one year getting into a huge fight with my parents when I refused to go to synagogue on a major Jewish holiday because I needed to exercise.

When I first came across the term muscle dysmorphia, I was terrified. Not just because I now recognized the problem and fit the symptoms but because I could not believe that it had a name. I am sure that many men have the same problem, but do not come forward.

Top 10 Signs of Body Image Issues in a Male*

1. Refusal to go out with friends if he hasn’t been to the gym.
2. Refusal to eat certain foods if he hasn’t been to the gym, or feeling bad when he eats certain foods.
3. Constantly commenting that he needs to go to the gym more when eating certain foods.
4. He puts the gym before work school or relationships. Also, he feels anxious if he misses a workout even if he’s injured or ill.
5. He treats his significant other like she or he comes second (possibly even third) to working out and eating right.
6. He works out constantly but refuses to take off his shirt in front of other people, or he only wears baggy shirts because he feels small and doesn’t want anyone to see his body. Also, he feels “small” or “puny,” while he actually has a larger than average physique.
7. He eats mostly protein bars, supplements, and shakes. Also, he is more prone to steroid or supplement abuse.
8. Refusal to go out to eat because he’s not sure if the restaurant will have anything healthy.
9. Refusal to go on vacation or travel, because he’s not sure if he’ll have a gym on the road.
10. The only time he eats certain foods (i.e., cake, chips, etc.) is when he is alone.
* Note that women can also display almost of these traits.

I didn’t admit I had an eating disorder or even realized I had one. I always thought eating disorders were for women and I was just very disciplined with what I ate. At the height of when I wanted to bulk up and get stronger, I needed to eat a 300-calorie meal every three hours. I passed up a better role in a high school play so that I could be backstage most of the time and sneak a quick bite to eat when it was time for my meal. I tried throwing up on several occasions but never could, and so I would tell myself I wasn’t bulimic. I stopped eating during the day, but I still ate at night, so I would tell myself I wasn’t anorexic. And when I wanted to bulk up so much that I resorted to strict, intense eating patterns and countless food supplements, I justified the behavior by believing I was just taking good care of myself.

Muscle dysmorphia is very hard to diagnose because it appears that the person is “just being healthy.” But putting the gym before everything else is not healthy. I used to go to the gym every single day, 5:30 a.m. before school started. People often complimented me: “You’re really disciplined!” or “That’s so great that you’re so diligent and healthy.” These comments reinforced my behavior because I would often think, Well, if I stop going to the gym at 5:30 a.m., people will think I’m not disciplined.

There is a double standard in our society. In high school I had friends that were women and they would exhibit the same behaviors that I would engage in: obsessing over food and working out as well as disordered eating patterns. A lot of people would tell them that they had a problem. But, because I was a guy, many people would tell me that I was healthy and really disciplined. Again, these types of comments just fueled my gym addiction. This makes it clear that complementing the behavior is unhelpful and even dangerous.

Today I feel healthier than ever with my body. Working on my show the past two years has been incredibly healing and has taught me so much. Most of all it has taught me to accept who I am, and that I wasn’t alone in my struggle. Dr. Ira Sacker, author of Dying to be Thin, believes that to truly heal, you must find your passion, and fill the void left after the disorder is taken away with that passion. For me, writing and performing is my passion, and bringing my message to young men and women has been the ultimate reward.

The more we can talk openly about these conditions, the more we can raise awareness. Two books I highly recommend include The Adonis Complex by Harrison Pope, and Making Weight by Arnold Andersen, Leigh Cohn, and Thomas Holbrook.

Michael Feldman was born and raised in New York City and currently lives and works out of Los Angeles. For more information please visit www.IAmFeldman.com.