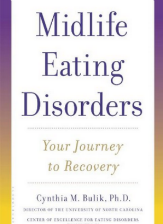 Cynthia M. Bulik, Ph.D., was kind enough to join us to discuss her book, Midlife Eating Disorders: Your Journey to Recovery. What follows is our questions in italics, followed by Cynthia’s thoughtful responses. 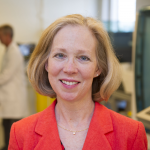 Let’s talk specifically about an individual with an eating disorder and their work/employment  life.  What can you share about the impact of eating disorders on “daily functioning and productivity?”

This paper did not include anorexia, but clinical observations are quite clear. All three eating disorders can severely impact work, productivity, and social life. All eating disorders can impair concentration, which can affect work. Prolonged hospitalizations in anorexia nervosa can lead to job loss and disability. Evening binges can lead to morning impairment that can lead to greater absenteeism from work.

What about the connection between sleep and mid-life eating disorders?

People often overlook the serious toll that eating disorders can have on sleep and adequate sleep, as we know, is essential for both mental and physical health. Our study showed that binge eating was positively associated with not getting enough sleep, sleeping poorly, problems falling asleep, feeling sleepy during work or free time (also speaks to your above question about work productivity), and disturbed sleep. We observed an independent association between sleep problems and binge eating, which is likely due to complex psychological, biological, neuroendocrine, and metabolic factors.

Sleep can also be severely impaired in individuals who abuse laxatives—they often take them in such as way that their effects are felt during the night interrupting sleep.

Individuals with anorexia nervosa often have impaired sleep secondary to malnutrition and to the sheer discomfort of a very emaciated body against a mattress.

Can you please identify some of the environmental stressors that may lead to mid-life eating disorders?

We know that genetic factors are operative in eating disorders, but they do not act alone.  Your genes don’t change over time, but your environmental triggers may. Many of the triggers that we see in midlife are related to loss, transitions, and health. Divorce, empty-nest, troubled nest, bounce back children, loss of parents or partner, loss of job, and unexpected decline in health can all trigger eating disorders in midlife. In addition, we have seen this expectation of not aging also contribute. In desperate attempts to fend off aging, women and men can start engaging in extreme practices (extreme exercise, cosmetic surgery) to try to maintain a youthful look and feel, and these things can be the first steps toward a full blown eating disorder.

Mid-life eating disorders can impose significant stress on a relationship. Can you describe some of the areas in which a partner is affected?

Partnerships are affected across the board! This is precisely why we are developing and testing UCAN (Uniting Couples in the treatment of Anorexia Nervosa) and UNITE (Uniting couples In the Treatment of Eating Disorders). Every conceivable facet of relationships can be affected by eating disorders from routine things such as food shopping, food preparation, and family meals to very intimate things like affection and sexuality.

The extent of awareness in partners varies from completely unaware of the eating disorder to the relationship being completely organized around the eating.

In BED, we have been noticing a not uncommon pattern of both partners having some degree of BED and binge eating together being sort of a shared guilty experience.

It has been amazing to see couples respond to working together toward recovery-both in UCAN and in UNITE. Partners feel like they can finally get some guidance in how to be helpful. There is always this lurking fear of saying or doing something that will exacerbate the problem. Patients often fear having to be honest and up front about their eating disorder, but ultimately are grateful for the support that their partners can give them through the recovery process. We are seeing more robust treatment gains and less drop-out from treatment when partners are involved!

What are your thoughts/suggestions on if, when, and how a parent might inform their children when the parent has an eating disorder?

This is en entirely personal decision. I have seen it be very helpful in some cases. We worked with one family in which the mom had anorexia in which it was quite helpful to let the children know that the problem their mom had had a name and that there was a treatment plan in place. It eased their fears that she was dying from cancer. Children are very observant and even though we might think that they don’t see what is happening around them, they have keen powers of observation.

It is also important just in terms of knowing your family history. We have no problems saying that we have family histories of cardiovascular disease or breast cancer as a way of calibrating vigilance for our own health, but we are not yet to that point when it comes to eating disorders. I look forward to the day that all screening forms at physician’s offices include not only these heritable “physical” diseases, but also a clear list of mental illnesses (which probably need to be renamed because it misses the fact that they too have biological bases) that run in families.

At the end of each chapter, you entitle a section “Awareness and Action.” These are designed for personal reflection and hope. How have your readers responded to these segments?

Overall responses have been positive. It is one thing to put information about midlife eating disorders out there, it is another thing to say what can you do in the here and now to create change in yourself and in others you care about. I think information is wonderful, but I think a blueprint for action helps give direction for change.

A clinical psychologist, Dr. Bulik has been conducting research and treating individuals with eating disorders since 1982. She received her BA from the University of Notre Dame and her MA and PhD from the University of California, Berkeley. She completed internships and post-doctoral fellowships at the Western Psychiatric Institute and Clinic in Pittsburgh, PA and developed treatment services for eating disorders in New Zealand and the United States. Her research includes treatment, laboratory, epidemiological, twin and molecular genetic studies of eating disorders and body weight regulation. She has active research collaborations in over twenty countries around the world. She has published over 500 papers and chapters on eating disorders and is author of seven books including Crave: Why You Binge Eat and How to Stop, The Woman in the Mirror, and Midlife Eating Disorders: Your Journey to Recovery. Her latest book Binge Control: A Compact Recovery Guide was released in February 2015.

She is passionate about translating science for the public. Her appearances include the Today Show, Good Morning America, CBS This Morning, CNN Morning, Katie, Dr. Oz, Dr. Phil, and Rachael Ray. She has been featured in many publications including the New York Times, the Washington Post, USA Today, Newsweek, Time, and the US News and World Report. Dr. Bulik holds the first endowed professorship in eating disorders in the United States.

Her work life is enriched by being happily married, the mother of three children, a gold medalist in ice dancing, and an avid ballroom dancer. Read more at http://cynthiabulik.com.