Home
Prevention
Similarities and Differences Between Over-Exercise and Compulsive Exercise

Similarities and Differences Between Over-Exercise and Compulsive Exercise 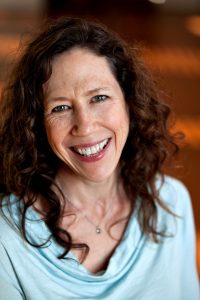 Exercise is a good thing, right? Most Americans don’t get enough exercise and suffer the health consequences, right? So, we should all move more, right? Right—and wrong. Professionals in the eating disorders field know that one of the most frustrating aspects of treating eating disorders is that not only do good things, like the pleasures of eating and the vitality-inducing properties of movement, go bad, they’re twisted and transmuted into things that have nothing to do with nutrition and exercise: measuring sticks of a person’s virtue and worth. Exercise, it’s largely agreed, is a necessary ingredient in physical and mental health and well-being, but in much the same way that an orthorexic eater takes the notion of the healthful properties of food to an extreme, so does the exerciser who becomes dependent on exercise in order to feel OK about themselves, even when the exercise is causing physical damage or adversely affecting their relationships.

Not everyone who over-exercises has an eating disorder or an “activity disorder” (a term coined by some in the eating disorders field) or even exercises compulsively. Not everyone who feels compelled to exercise or is emotionally dependent on exercise is over-exercising. Here, I’ll discuss the similarities and differences between the two. Think of a Venn diagram, with two circles: over-exercise and what’s called “compulsive” or “obligatory” exercise. In the center, where they overlap, lies the combination of over-exercise and compulsive exercise. 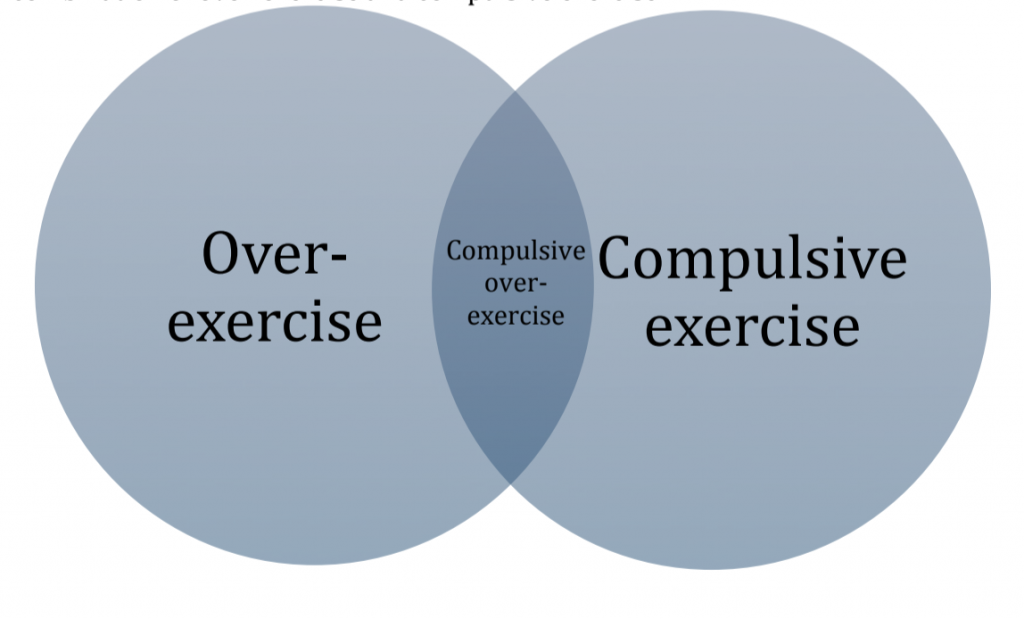 How do we know how much exercise is too much? Let’s start with how much is enough: in the November 2018 Journal of the American Medical Association (JAMA) article, “The Physical Activity Guidelines for Americans,” Katrina Piercy, et. al. recommend that adults “should do at least 150 to 300 minutes a week of moderate-intensity, or 75 minutes to 150 minutes a week of vigorous-intensity aerobic physical activity, or an equivalent combination of moderate-and-vigorous-intensity aerobic activity. They should also do muscle-strengthening activities on 2 or more days a week.” The recommendations go on to address specific populations, such as older adults, pregnant and postpartum women, and adults with chronic conditions and disabilities. “Recommendations emphasize that moving more and sitting less will benefit nearly everyone.” This article doesn’t mention any populations for whom over-exercise or compulsive exercise is a risk. So are we to assume that if a person is exercising within these guidelines, they’re not over-exercising?

Let’s look at what the research says about over-exercise: A November 2015 article in The American Journal of Medicine titled, “Exercise and Health: Dose and Response, Considering Both Ends of the Curve,” states that while moderate exercise is necessary for good health, when it comes to the health benefits of more intense exercise, there comes a point of diminishing returns. More exercise doesn’t equate to better health. For those who enjoy intense exercise, it can be done safely. But the health benefits beyond those of moderate exercise are marginal.

And, there is such a thing as over-exercise. MedLine Plus, a resource from the National Institutes of Health (NIH) U.S. Library of Medicine, lists a number of signs of over-exercise in its August 2018 article, “Are You Getting Too Much Exercise?” It stresses the importance of rest along with regular exercise and advises stopping exercise entirely for one to two weeks if experiencing any of the conditions associated with over-exercising, including mood swings, irritability, and depression along with over-use injuries and decreased immune function. People who don’t have disordered attitudes about food, body, and exercise can over-exercise, but unlike disordered exercisers, chances are they’ll follow this recommendation, take some time off, rest up, and be more careful in the future. They’ve accidentally overdone it, and so course-correct.

This article goes on to list a number of tips for avoiding overtraining, including eating enough calories for “your level of exercise,” and taking at least one full day off from exercise each week. I mention these two because I see problems with them so often in my practice—often clients with anorexia whose task at hand is to weight-restore, who are expending needed calories through exercise that is also straining their hearts and other muscles. Going back to the AMA physical activity guidelines, a person could be exercising no more than this recommended amount, but if their caloric intake is inadequate to support their caloric output, they are over-exercising. If they’re expending more calories than they’re taking in, or their caloric expenditure is preventing weight restoration, they’re over-exercising.

This article also discusses compulsive exercise, which it defines as, “When exercise is no longer something you choose to do, but something you have to do,” and offers signs of compulsive exercise (e.g., feeling guilty or anxious when not exercising, exercising despite illness or injury, family/friends/healthcare providers being concerned about the time spent on exercise) along with the caveat that it can be related to eating disorders, and suggestions for getting help. It’s important to recognize, when distinguishing between non-compulsive over-exercise, compulsive exercise, and the overlap of the two, what determines the addictive or compulsive qualities of the relationship with exercise is mental attitudes and impact on a person’s life, not the quantity of exercise.

Compulsive, or obligatory, exercise was first named in the 1970’s as “running addiction,” after the positive psychological benefits that runners enjoyed were identified, followed by the discovery of the deleterious effects of running when taken to extremes, described as a “negative addiction.” Various studies have examined compulsive exercise, and a group of researchers undertook a review of the existing literature and published their findings in the March 2017 Psychology Research and Behavior Management article, “Compulsive Exercise: Links, risks and challenges faced.” The authors state, “This review found that compulsive exercise is associated with eating disorder pathology, perfectionism, neuroticism, narcissism, and obsessive compulsive traits. The most prominent negative consequences were injuries, social impairment, and depression, but more research is needed to uncover the potential dysfunction resulting from compulsive exercise.”

This article goes on to discuss a number of scales and measurement instruments that have been developed to determine if someone’s relationship with exercise is compulsive. One that I use when assessing a client for compulsive exercise, Hausenblas and Downs’ 21-item Exercise Dependence Scale (EDS), is based on alcohol dependence criteria from the DSM, for just as the amount of alcohol consumed doesn’t determine whether someone is an alcoholic or has an unhealthy dependence on alcohol, the amount of daily or weekly exercise a person engages in doesn’t determine whether they have a disordered relationship with exercise. This scale measures categories such as dependence, tolerance, and withdrawal. Other scales include Pasman and Thompson’s Obligatory Exercise Questionnaire, (OEQ) and Terry’s Exercise Addiction Inventory (EAI), both of which are available online and easily administered in an outpatient setting.

One finding that struck me was the distinction between compulsive exercisers who have an eating disorders and those who do not: compulsive exercisers without eating disorders “primarily focus on performance over weight loss,” usually consume an adequate amount of calories, and don’t mind gaining weight in order to improve performance. This stands in contrast to the eating disordered clients whose reasons for exercise are associated with thinness or prevention of fatness, which in turn is associated with personal worth, value, and social acceptance. This reminds me of something I often discuss with my clients: the notion of “set-shifting.” Set-shifting is the ability to shift attention from one task to another, to adapt to changes in situations or the environment, using different tools suited to the new task. Research shows that people with eating disorders have a much harder time with set-shifting than people who don’t have eating disorders. With respect to exercise, this shows up with my eating disordered clients like this:

Me: Right now, you need to get back into a regular weight range, and you’re expending a lot of calories through exercise, which is why your physician, your dietician, and I are recommending that you refrain from exercising for a while.

Client: But exercise is healthy.

Me: for most people, most of the time it is. But for you, right now, it’s not.

Client: But exercise is healthy. How can it not be healthy?

Me: Because your brain and body aren’t getting the nutrients they need in order to function well, as evidenced by your low weight and your restrictive eating. In order to nourish your brain and body adequately, you need to stop “spending” calories and put more “money,” that is energy, into the “bank account” of your body and brain.

Client: But it’s not healthy not to exercise.

Me: It’s really hard to see it differently, isn’t it?

This client has been applying the notion that Americans are too sedentary and must move more to themselves and can’t recognize that the task at hand is different and requires a different approach.

Not all compulsive exercisers who have eating disorders are underweight, but the inherently unhealthy nature of the disordered relationship with exercise and the ways it’s entangled with eating-disordered beliefs and attitudes mean that it must be addressed and resolved for recovery. Convincing clients who compulsively exercise to reduce their exercise or refrain from it altogether is hard in part because of this. I’m a big believer in getting information into their minds that counters the conventional wisdom of our culture that perpetuates eating-disordered perspectives. Some resources for clients are the National Eating Disorder Association (NEDA) sheet on Compulsive Exercise, the aforementioned MedLine Plus article, and a short, cute animated video on the effects of over-exercise from Business Insider, “What Too Much Exercise Does To Your Body and Brain”.

In private practice, I find that a client’s ability to cut down on or abstain from exercise can be the main criterion that determines whether they can remain at the outpatient level or move to higher level of care. Sometimes a person needs the structure of residential or inpatient treatment in order to not to act on urges to exercise, and movement, when added back in, must be introduced slowly and monitored well. Like any other aspect of an eating disorder, the attitudes and behaviors around exercise can take a long time to change, but with the right kinds and amounts of support and treatment, the change can happen.

Deborah Klinger, M.A, LMFT, CEDS-S, is in private practice in Durham, NC.  She’s been treating eating disorders since 1990, and is an AAMFT Approved Supervisor, certified Internal Family Systems Therapist, and Phoenix Rising Yoga Therapy practitioner. A graduate of the Trauma-Sensitive Yoga certificate training at the Trauma Center at JRI, she teaches yoga for trauma, and her own “Love Thy Body: Yoga for Eating and Body Concerns.” She is combines DBT, IFS, Sensorimotor Psychotherapy, and EMDR for a holistic, body-mind approach to healing. Deborah is a seasoned presenter, is published in “Eating Disorders: The Journal of Treatment and Prevention” and was the Eating and Food Issues Topic Expert for goodtherapy.org from 10/09-1/15.