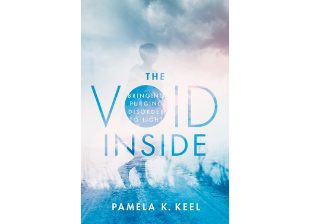 Pamela K. Keel, PhD, joined us for an interview on her book, The Void Inside: Bringing Purging Disorder to Light. What follows are our questions in italics, and her thoughtful responses.

You started your work with purging disorder in 1998. What happened to motivate you to write The Void Inside: Bringing Purging Disorder to Light?

About 10 years after I first started work on purging disorder, my research findings attracted attention from major news outlets, and I started receiving e-mails and calls from people around the world about their experiences with purging disorder. This still happens today. There are so many people struggling with this illness and so little information widely available to help them. After 20 years of studying this problem, it was time to use what we’ve learned to try to help people with purging disorder.

The central feature of purging disorder is purging to influence weight or shape. That is, individuals with purging disorder use self-induced vomiting, laxatives, diuretics, or other medicines (like omitting insulin) because they are afraid of gaining weight or becoming fat. That fear of fat is embedded in cultural values that emphasize the importance of being thin and stigmatize those whose body weight falls in the overweight or obese range. These values equate thinness with being healthy, beautiful, popular, and a fundamentally good person. As we see these cultural messages spread through mass media and social media, we see more people adopt purging as a weight-control method despite how harmful purging is to health.

You entitled Chapter 4 as “Purging Unwanted Calories and Feelings.” Please share a bit about purging feelings.

When an individual purges out of a fear that what they’ve eaten will make them fat, the purging behavior not only gets rid of the calories, it gets rid of that fear.  Although it is not healthy, purging serves a function of helping a person manage difficult emotions – at least in the short term. In this way, a lot of negative emotions get funneled into the experience of “feeling fat.” That is, feeling fat represents an embodiment of distress. This increases the likelihood that a person will use purging to cope with a range of negative feelings – anxiety, frustration, anger – and trap the person in a vicious cycle in which their short-term fix for bad feelings can’t address the original source of those feelings, and those bad feelings come back again and again. In addition, the secrecy of purging adds to distress by increasing feelings of shame and isolation.

What is important to know about the biological differences of those with purging disorder?

I’ve conducted a number of studies to try to understand why individuals with purging disorder feel compelled to purge after eating normal or small amounts of food, whereas individuals with bulimia nervosa will continue to eat until the food is gone. Given the dramatic differences in eating behavior, I focused on biological factors that regulate food intake – that is, factors that contribute to when we feel hungry and when we feel full. Across a series of studies, we’ve developed a picture in which individuals with purging disorder get normal signals to their brain for when to stop eating, but after they’ve finished eating, their bodies release more of a hormone that signals the brain that they’ve eating too much. And the release of this hormone contributes to their experience of nausea, bloating, and discomfort and urges to vomit. This contrasts with bulimia nervosa. Individuals with bulimia nervosa experience a smaller release of hormones that signal the brain to stop eating in the first place – and that may explain why they consume such large quantities of food when they binge.

Can you offer some recommendations on what physicians should look for in their clinical exams that would suggest purging disorder?

Like many in the field of eating disorders, I would like to see universal screening for all eating disorders. The best way to identify if a patient may be struggling with an eating disorder is to ask a small number of specific questions about their eating behavior. This is important because most people with an eating disorder, including those with purging disorder, don’t look any different on the outside. It’s what they are doing in secret that is hurting them. However, there are some specific signs that are associated with the different forms of purging that physicians would find during a physical exam. These include low blood pressure and altered heart rate due to dehydration and electrolyte imbalances, swelling of salivary glands, callouses on the back of the hands or knuckles, sores in the mouth and throat, and complaints of constipation or bloating. The chapter on medical consequences of purging reviews published guidelines on labs that should be run and medical management of eating disorders, including purging disorder.

Please share information on the link between dietary restriction and “loss of control.”

Dietary restriction for the purpose of controlling weight establishes an approach to eating in which the individual uses rules for what to eat and when to eat rather than responding to the body’s signals of hunger and fullness. To produce weight loss, dietary restriction requires eating less food than the body needs to perform its normal functions. This causes a range of biological alterations as the body attempts to compensate for the stress of not getting enough fuel. For example, even though individuals with purging disorder are not underweight, many have lost weight through their efforts to restrict their food intake and dehydration. Related to this, we see lower levels of leptin – a hormone that influences brain regions that regulate food intake – and higher ghrelin levels – a hormone that drives hunger. This means that their bodies are sending signals to their brain to eat more food.  However, for a person with purging disorder who is terrified of gaining weight, dietary lapses – even though they don’t involve a large amount of food – are very threatening. In this way, individuals with purging disorder feel a loss of control over their eating even when they aren’t eating more than other people eat because they are giving in to urges to break their diets. This sense of breaking a rule combined with fear of gaining weight, combined with a biological response to food that makes them feel queasy contributes to that sense of “loss of control” over eating.

About the author: Pamela K. Keel, Ph.D., is Distinguished Research Professor and Director of the Eating Behaviors Research Clinic in the Department of Psychology at Florida State University. She received her A.B. in Anthropology summa cum laude from Harvard University in 1992, Ph.D. in Clinical Psychology from the University of Minnesota in 1998 and completed her clinical psychology internship at Duke University Medical Center in 1998. Dr. Keel has received grants from the National Institutes of Health (NIH) for her research on the nosology, biology, epidemiology, and longitudinal course of bulimic syndromes.  In addition, Dr. Keel is co-Principal Investigator and co-Director of the NIMH-funded Integrated Clinical Neuroscience Training Program at Florida State University. She has authored over 250 articles and chapters and 4 books on the topic of eating disorders. Dr. Keel currently serves on the editorial boards of the International Journal of Eating Disorders and Eating Disorders, and is a past Associate Editor for the Journal of Abnormal Psychology, and was appointed as a standing member of a grant review panel for the NIH Center for Scientific Review. Dr. Keel was elected as a Fellow of the Academy for Eating Disorders (AED) in 2006, Fellow of the Association for Psychological Science (APS) in 2013, and Fellow of the American Psychological Association (APA) in 2014.  She served as President for the Eating Disorders Research Society in 2009-2010 and President for the AED in 2013-2014 and received the Leadership Award in Research from the AED in 2019.Within her program of research, Dr. Keel defined and characterized Purging Disorder as a potentially new disorder of eating, and this work contributed to the inclusion of Purging Disorder as an Otherwise Specified Feeding or Eating Disorder in the Diagnostic and Statistical Manual of Mental Disorders 5th Edition (DSM-5) and is the focus of her most recent book published by Oxford University Press in 2020, The Void Inside: Bringing Purging Disorder to Light.

The Many Faces of Binge Eating Disorder